“It’s been really confusing to be constantly working, representing as a woman, I work everyday as this character, be called by her, and when I am her, I feel like the most powerful version of myself. And then I take it off, and then I’m no longer that person. And so, now I’m a boy and my personality is supposed to contrast that? Getting in and out of drag had me very confused, and I couldn’t define why there was something extra about me in drag that feels more feminine… and I think it’s the separation of James and Valentina. I have now interpreted and understood that I am both all the time. I identify with the heart of a woman, without having any sort of discomfort or confusion with living in my male body. I just identify as either. I don’t necessarily have to decide. I’ve put my foot down because this is who I am.

Things are changing, and you have to push the conversation forward and that’s all I can do to help. If it helps, so be it. If it doesn’t, I get to be a pioneer for something, even if I’m not the best representation, even if I’m not the activist.” – Valentina on gender identity.

On the true meaning of ‘fantasy’
“The fantasy is the world you can live in and be taken over by the spirit of delusion, you create these defence mechanisms about life that allows you to continue being happy, because life isn’t as fabulous as I dreamt it, so I’m gonna keep dreaming it until it all comes and meets up with me!”

On RuPaul’s Drag Race
“I had been waiting and dreaming of a big moment, has some of it been very difficult and challenging? Oh yes Mary, but that’s exactly what I signed up for. If you can’t handle criticism, you can’t handle success.”

“I’m very different from all the other Ru girls because some queens say, ‘Oh they edit me bad,’ but I am so immensely grateful to Drag Race, to this part of my humble beginnings, for giving me the platform to become who I am today with the character I’ve created.”

On a return to Drag Race for a third time
“It’s not on my list. I would hope that if it came around, I’d be so busy with my endeavours that I’d have to say no! If I was available Mary, what a fun fucking ride it would be to do that shit again. But I don’t feel the need to compete with a bunch of people. I’m done being a competitor, I don’t see it like a sport. I see it as an art. If you notice on All Stars 4, I wasn’t competing against other people. I was like, ‘All you girls are worried about who’s gonna win the challenge, I’m just worried about putting more glitter on.’ I just want the DJ to push play, I want the bitch to turn the light on and let me perform!”

On role in Broadway show Rent Live!
“I got to be a part of an experience where I push forward that topic of conversation authentically through who I am. And I myself, through the role of Angel, found out a lot of unanswered questions around my own gender identity. It made me discover, ‘Well, how do I feel? What do I think about myself in this moment?’ Around that time, I was questioning if she was non-binary or trans, where did my heart lie with this? How can I tell this authentically? It was such an honour to play a role that was created for people like me to exist, and to exist in major roles that have a heart and a story and emotion, instead of just being seen as comic relief.”

On lack of education in schools about the LGBTQ community
“I find it to be very entitled that the system is only teaching students how to have protective sex in a heterosexual relationship, what if we taught each individual person to protect their bodies in whatever case they’re gonna have? It’s not as progressive as it should be, and I do think it’s a university level conversation. I came out as non-binary to all of Latin America, which is an extremely macho culture with predominantly Catholic territories. The more people are talking about it, the more people demand respect for how they should be spoken to.”

On others understanding her gender identity
“I’ve gone against the grain and I’m not your average person. Being easily offended by people is living in the state of being a victim, so if you invest your time in trying to make someone understand, and they still don’t, it ends up affecting you way more. At the end of the day, I’m happy. When people don’t understand, ‘Well Mary, gotta go, gotta go, I’ve gotta catch a flight to my next dream, sorry!’”

On internal issues in the LGBTQ community
“There is internalised homophobia, of course, just look at the Drag Race following. Bitches are fucking crazy. We have a bigger battle to fight rather than yelling at a person, ‘You’re a fucking man! Non-binary my ass.’ People really wanna get that way, y’know? Go suck a dick. It will make you feel better.” They need to know that who they were born as came with this privilege, and because they were born with this privilege, it should be a duty for them to help those that are in need.”

On developing a deeper connection with the trans, non-binary and gender non-conforming community
“Since coming out as non-binary, I’ve connected with a lot more of the trans community. I’ve gone to safe trans places and it’s such a beautiful community that look out for one another. I want to thank the community for being so kind with me, and I’ve been trying my best to advocate for them in Latin America because there isn’t a lot of safe spaces.”

On her advice for people feeling similar to her
“Don’t ever feel pressured for anything. Take time to understand yourself, your body, your gender, how you present. Being non-binary is way more than the physical attributes. Sometimes we think with our minds, with our hearts, and sometimes we have a natural intuition to feel inclined a certain way. Trust yourself and be patient.”

On proving herself as an artist
“It’s the mistakes that fuel the anger or aggressiveness to want to achieve higher than that low point, and sometimes when you do something wrong, it can be fucking beautiful.”

“All these things that my crazy French vanilla ass aspires to be are things people tell themselves but won’t tell anybody, because they think it won’t happen, I verbalise them because I’ll be like, ‘Oh shit, did I just say that out loud? Well now I have to make it happen bitch!’ If I don’t, I’ll look stupid. I’m just trying to convince you to see it with me, because baby if you don’t believe, watch me go do it.” 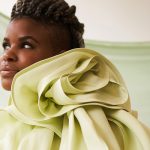